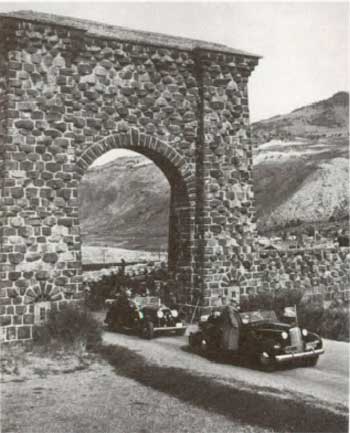 The history of Yellowstone's Northern Range is incredibly rich. Although Yellowstone was established as the world's first national park in 1872, the region's history stretches back to the first explorations by European fur traders and the many Native American peoples who had relationships with the area's resources.

Although President Ulysses Grant signed the park into existence on March 1, 1872, it took many years for the park to become accessible to visitors. However, from the beginning, the Northern Range played a key role. The first entrance to the park was constructed near the confluence of the Gardiner and Yellowstone Rivers, and the town of Gardiner sprung up just outside the park boundaries shortly thereafter. Early visitors to Yellowstone came by rail into Gardiner, and then by wagon into the park. The area around Mammoth Hot Springs was the first location inside the park to have guest facilities (some enterprising men set up a ranch and bathhouse even before the park's creation), and soon became Yellowstone's headquarters.

The Colter Pass-Cooke City-Silver Gate area began somewhat differently: though located just outside park boundaries, the rugged mountain location made travel somewhat difficult in the late 19th century. People first came here because of gold, which was first discovered in July 1870. Because of the geography, the towns stayed small and somewhat isolated, but they eventually became celebrated for their climate. The snow here is some of the most spectacular in all of Yellowstone, making this part of the Northern Range ideal for cross-country skiing and snowmobiling.